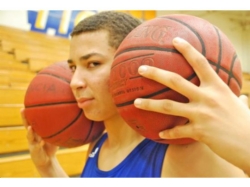 BY BRIAN WHITEHEAD / STAFF WRITER-Orange Co. Register -
Jan. 15, 2015-Updated Jan. 16, 2015 12:02 p.m.
Work hard when nobody is looking.
Wise words from Darryl Jenkins have his eldest son, Jordan, playing the best basketball of his life.
“My dad always wanted me to be the best I could be, no matter who was watching,” said Jordan Jenkins, a senior guard at Valencia High. “It was the hours I put in when I was alone that really set me apart from everyone else.” Read the rest of the story....
Darryl Jenkins started at offensive tackle for Georgia Tech from 1986 to 1989. He went undrafted out of college, but signed with the San Diego Chargers before the 1991-92 NFL season. His volleyball-playing wife, Lisa – then Lisa Kofskey – is Georgia Tech’s all-time leader in career and single-season solo blocks.

Jordan Jenkins inherited big shoes growing up in Placentia. Basketball was ultimately how he chose to fill them.

“We both benefited in our lives from being involved in sports,” Darryl Jenkins said. “We always hoped to one day be able to sit back and watch our kids play.”

Jordan Jenkins fell for basketball young, later playing annually for his father in local recreational leagues. Darryl Jenkins would be lying if he said his son’s decision to stop playing football as a preteen didn’t sting, but Jordan Jenkins always longed to make a name for himself.

Jenkins grew up a point guard, a natural distributor. He joined club basketball in sixth grade, and quickly became one of the better facilitators on the circuit.

Jenkins played freshman ball for Valencia in 2012, and then grew 5 inches that summer. He earned a spot on varsity as a sophomore, impressing coaches with his ball handling and strength.

“I wasn’t very fast, I wasn’t very athletic, and practices were a challenge, but as the year progressed, I became more a part of the team,” said Jenkins, who made 28 appearances during the 2012-13 season, averaging less than four points per game.

Jenkins is a guard trapped in a wing’s body.

His court vision and passing chops goose Valencia’s offense, and Jenkins can shoot from anywhere on the court. He’s a lefty, so guarding him is a bit unorthodox, but he can drive with his off hand if opposing defenders force him right. At 6-foot-4, Jenkins is one of the best finishers in Orange County.

Longtime Valencia basketball coach Dean Yoshimura trusts Jenkins’ instincts. His basketball IQ is off the charts, the coach says, and Jenkins is selfless. He doesn’t need 15 to 20 shots to make his presence felt. Jenkins has attempted more than 10 field goals in a game only twice this season, settling comfortably within the offense at seven to eight shots a game.

Teams have put their center on Jenkins this season in hopes of neutralizing his physicality in the paint. Jenkins will often drift beyond the 3-point line in those instances, leaving opponents with no rim protection. The torque Jenkins puts on a defense opens driving lanes for teammates, and Jenkins can easily beat larger players off the bounce.

He’s averaging close to 10 points per game this winter, three more than he averaged as a junior, when he received first-team All-Empire League laurels and Valencia won 19 games.

“Jordan does anything we ask him to,” Yoshimura said.

In the first quarter of a recent nonleague tilt against Troy High, Yoshimura lost starting point guard Brian Chen to injury. Jenkins filled in at the point and kept Valencia’s offense humming. The Tigers triumphed, 55-47, with Jenkins scoring 14 points to accompany eight rebounds, four assists and a steal. Jenkins prides himself on being a jack-of-all-trades on the court, subtly filling box scores. He leads the team in blocked shots and charges drawn.

Valencia is 15-2 with a pair of preseason tournament championships. The team is outscoring opponents by an average of 17 points, and Jenkins is a big reason why.

“We have a bunch of guys that score the ball, that share the ball,” he said. “I try to do the little things: get in the box on defense, take charges, make the extra pass, score, all the little things. Me and the other captain like to be leaders on the court, too. We like to help the younger guys.”

Jenkins’ field goal percentage isn’t where he or Yoshimura want it to be (he’s shooting 46 percent on 125 attempts), but he’s not taking ill-advised shots, and he's actually shooting better than he did in 2014. Classmates Eric Yang and Brennon Palmer each have more shot attempts, but Jenkins is Valencia's best rebounder and distributor.

Few players are as versatile.

Jenkins has spent the past two summers getting up as many as 1,000 shots a day. The nets at Morse Elementary, his former school, rejoice when Jenkins' school year begins, if only because they won't have to dance five days a week the ensuing nine months.

Jenkins' accuracy dips from beyond the arc, but his field goal percentage will improve in time.

“We’ll have Jordan run off multiple screens, sometimes three at a time,” Yoshimura said. “He’s so big that he attracts attention wherever he goes. We use him as much as we can. If he doesn’t have an open shot, he’ll find someone who does. He has a lot of skills, and he’s maturing as a young man.”

Jenkins has heard from friends and family that he’s a better baseball player than basketball player.

Southpaws with live arms always have been coveted by college recruiters, and at 6-4, 195 pounds, Jenkins has ideal size for a pitcher. He threw 28.1 innings as a junior, posting a 0.74 earned-run average and 3-0 record. Valencia won a program-record 27 games and advanced to the Division 2 semifinals, where it lost to eventual CIF champion Temecula Valley High.

Jenkins will letter this spring for a second time, and Valencia baseball coach Joe Secoda expects Jenkins to play a much larger role in 2015.

“We’re expecting him to be everything we think he’s going to be, building off last year,” said Secoda, who also said Jenkins will play first base when he’s not pitching. “The best thing about Jordan, baseballwise, is he’s young, he’s raw and he hasn’t pitched a ton because he plays basketball during the summer. He still has a lot of bullets left in his arm.”

Darryl Jenkins said he wants his son to pursue the school that makes him feel wanted, to choose an institution that fits his academic goals and achievements. Jordan Jenkins is a four-year member of Valencia’s Val Tech program, a curriculum for students with a special interest in technology. His grades have never slipped despite playing multiple sports all four years.

“We’re telling him to follow his heart, and what he strives for in the future,” Darryl Jenkins said.

Jordan Jenkins’ heart is split at the moment, though not without direction.

“I’ve never loved baseball like I loved basketball,” Jenkins admitted. “Since I was little, I’ve wanted to play basketball in high school, on varsity, at the college level. … I want a great education for the future, past sports. Whatever colleges want me to do, I’ll be open to it.”